Unable to compact the working file database prior to saving. Print

The error message indicates the AGI file has become corrupted in a way that is preventing it from being compressed when it is saved. The good news is the file is still being saved, but the bad news is the file will become large in size since it cannot be compressed any longer.

To attempt to resolve this, you would need to Import that AGI file into a new, blank AGI file in an attempt to clean up the file corruption. The caveat to this resolution though is everything will be imported under one single project so if you were using Project Manager to divide up entities you will need to redo that work.

To do this try the following:

2. Click on the arrow on the import dropdown and select AGI File. 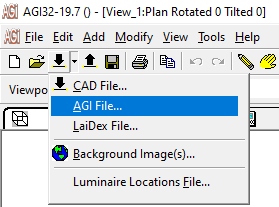 3. Select your original file, and in the following window click on the Select All button. With everything checked, click Ok. 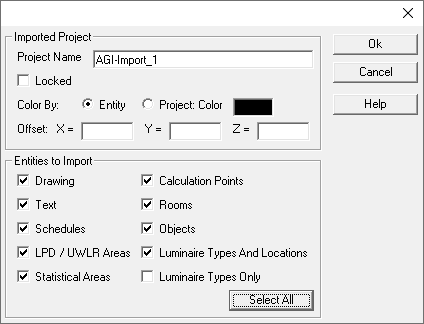 4. AGi32 will attempt to import the project into the new file. You will get the warning again, but ignore it for now. Once it's done importing attempt to save it and see if the error is resolved.

If that doesn't resolve the error then there isn't any other way to recover it. The error though is just a warning that AGi32 could not compress the file, but it is still saving the file. If you aren't concerned about file size then the project will still be mostly usable, if maybe a bit slower.

Possible Causes and Solutions to Help Avoid the Issue:

Most occurrences of file corruption have been on computers where the User folders have been mapped to a network or cloud-based location and/or if the AGI file itself is saved to and being read from a network or cloud-based folder location. AGi32 writes an uncompressed, working version of an open file into [C:\Users\<YourUserName>\AppData\Local\AGI32...]. Microsoft warns against mapping Users' folders to a network drive but doing so can make backing up user data easier so it is done nonetheless.

When the working file, a file that is in a state of flux and is constantly being changed to reflect what is occurring in the model itself, is not located on the computer's local hard drive, hiccups or delays in communications over the network can cause problems correctly updating the file's data which can cause file corruption. The larger the file is, the more likely it is to become corrupt if there are communications issues. It is because of this and because of Microsoft's recommendations that we recommend the "Users" folder and any subfolders remain unmapped and located on the local hard drive. This will help avoid file corruption and the occurrence of the error message.

Similarly, if the AGI file itself is saved to a network or cloud-based location, communications hiccups and timeouts can also cause corruption of the data during the saving process. When a file is saved, the uncompressed, working-version of the data is compressed then the compressed file saved to the specified location. If problems occur during this process, the file can end up getting saved in an uncompressed state (larger file size) and potentially become corrupt. As mentioned in the paragraph above, the larger the AGI file is, the higher the chances for problems compressing and saving to a network or cloud location if there are connectivity issues of any kind between the host computer and the save location. To avoid this potential for problems, save files to a non-mapped location on the local computer's hard drive. If the file is already saved and needs to be opened, copy or move the original file from the network/cloud location to the local hard drive before opening the file and save any edits of the file to the same local hard drive location. If files need to be on the network for some reason, when all work is done and AGi32 is closed, copy or move the newly-saved files over to the network location where they need to be.

Another potential issue may be large coordinates and/or an enormous model with many calculation points. Imported DWG files can sometimes cause the model to have large coordinates in the hundreds of thousands or millions. You can use the Translate Origin command in the Tools menu to make the coordinates smaller. Simplifying the model may also help avoid the problem in the future.