How do I show lamp spectral effects (color, CCT) in AGi32? Print

This is doable—with caveats. NOTE: This is for visual effect only; it should not be considered visually correct. (This statement applies to showing lamp spectrum effects with any of today’s software, not just AGi32.) The reason for this is below.

The white point for computer screens is 6500K full-spectrum white light, mimicking daylight. That means that CCTs like 5000K and 4000K will appear warmer when you mimic them on your screen.

In the Define Luminaire dialog, click in the "Luminous" color box (next to the Render Symbol field) to bring up the SRE Selector dialog. Read the first paragraph in the Hint that pops up:

By the way, other software that lets you specify the CCT also converts the selected CCT to RGB values for the purpose of the display. Same process, same shortcomings and caveats, which are covered below.

On the Source Color tab, you see a list of some Standard CIE Illuminants. Below that there is a list of CCTs from 2000K to 6500K. Each of these sources and CCTs has Red, Green, and Blue components assigned to it so that it may appear correct on the computer screen. Looking at the color swatches there, you might think that the one for HP05 Metal Halide (CCT = 4039K) looks a little too warm. Scroll to the very bottom of the list to see why: As mentioned above, 6500K is white. All CCTs that are lower than that appear warmer by comparison. But don't worry; this effect can be accepted or modified in Render Mode. 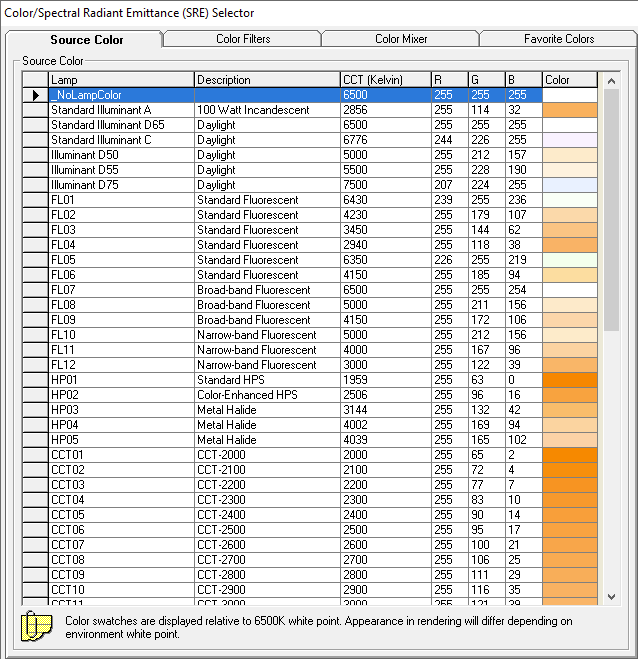 Let's select HP01 Standard HPS, for our example, as the results are more dramatic. Note the RGB components: R=255, G=63, B=0. Return to the Define Luminaire dialog and complete the luminaire definition. Place your luminaires and calculate. Look at the results in Render Mode: Doesn't look like HPS, does it? This is because AGi32 is accounting for something called "chromatic adaptation." The human eye sees warm-white light as white, and it also sees cool-white light as white. As long as we don't see them side by side, they both look white. However, HPS is not close enough to white for us to see it as white; it always looks rather orange or yellow. So we need to make an adjustment to counter the chromatic adaptation effect that AGi32 is implementing automatically.

NOTE: If the sources present in your file have different CCTs, AGi32 will select the highest CCT present as the Automatic value.

1.    As you know, light is not composed of just three wavelengths of light! Our eyes are fooled into seeing white light if we have just the right combination and balance of red, green and blue light. But with the exception of RGB-combination LED luminaires, our light sources have a much more complicated spectral power distribution, almost always spanning the entire visible spectrum. So, this method of showing lamp spectral effects isn’t real; it’s “faking it.”

As an example, the RGB values for mimicking standard HPS are R=255, G=63, B=0. This combination will create an HPS-like effect on the screen. (255 is the maximum value for R, G or B.) In real life, HPS lamps are rather weak in the red part of the spectrum. They have some red, a lot of yellow, a lot of yellow-green, and a little bit of blue and violet. The effect is that yellow-orange color that we perceive as HPS. HPS lamps do not render red well; they make it look dull and kind of brownish. But red surfaces on the computer monitor will look great under this source because of the high R value. As for the Blue component, there is none (B=0) when displaying this source on the screen, even though in real life HPS has a little blue in its spectrum. In real life, blue cars look kind of blue, but on the computer monitor with the HPS source selected, a blue car will appear gray.

2.    In order to know what objects will look like, we need to know how they reflect light, in quantity, directionality, and spectrum. For the spectrum part, AGi32 displays all object/surface colors as a combination of red, green and blue components. Remember, red, green and blue pixels are all the computer screens have to work with. With these three components, as well as variations in brightness and saturation, we can show essentially any color this way, at least for the sake of appearance. But (as you know) objects in the real world reflect more than just three wavelengths! So again, we are “faking it.” Why don’t we use full-spectrum reflectance information instead of just RGB components? Because that information is virtually non-existent. (Author's note: I saw a couple of graphs from GE Lighting once that showed the typical spectral reflectance distributions for lettuce and tomatoes. Tomatoes reflect mainly red, as you might expect. But lettuce reflects a great many wavelengths, giving an overall effect of green. I am not aware of information of this kind on any other surfaces; who would take the time to measure it?) And even if it were available, we are still limited by the monitor's RGB pixel technology.

When is this method of displaying lamp spectrum effects accurate, and when isn’t it? There are four general conditions that can occur:

1.    Light that is not deeply colored, and surfaces that are not deeply colored; everything is rather neutral and bland: No problem. Without a lot of color in either the source or the surfaces, things should look pretty good; in other words, as we would expect them to look.

2.    Light that is deeply colored, but the surfaces are neutral: No problem. The colored light will reflect off neutral surfaces with little change in color.

3.    Light that is neutral, but the surfaces are deeply colored: No problem. The colored surfaces receiving neutral (RGB-balanced) light will reflect light that is colored like they are.

4.    Light that is deeply colored and surfaces that are deeply colored: All bets are off. You might get lucky and have things look reasonably correct, or you might not. It all depends on how well those R, G and B components represent the light spectrum and the reflectance spectrum of the surfaces. You can look at a lamp’s SPD curve to get an idea of the first, but we have no idea about the second for most things in our world.

Fortunately, most of our world is not deeply colored. We tend to use color as an accent rather than as a main color. And the light sources that we use are usually not deeply colored either. It’s even rarer that we get both at the same time. Also, it could be argued that most of the time it probably isn’t necessary to show lamp spectral effects, as our brain usually tries to see white light, as long as the color is consistent. (As mentioned above, this is called chromatic adaptation.) We don’t perceive that incandescent is yellow unless we see it next to something that is quite a bit cooler, such as 4100K fluorescent. When all of the lighting is incandescent, we perceive the light as white. When all of the lighting is 5000K fluorescent, we perceive this light as white also. We are so easily fooled; we even perceive red + green + blue as white!

For more on this topic, please check out the "Color / Spectral Radiant Emittance (SRE) Selector" topic in AGi32's Help.

IMPORTANT: While changing the Source Color does not affect output and calculations, applying a Color filter does reduce light output and affects the calculations which can then require applying a Light Loss Factor (LLF) equal to the reciprocal of the SRE value to counter the loss. For instance, if a Color Filter or color in the Color Mixer is applied that takes the SRE value to "0.78", an LLF of "1.28" would need to be applied to counter the loss [1/SRE=LLF --> 1/0.78=1.28]. This LLF is in addition to any other LLFs that have been applied.