started a topic 7 months ago

I made my own building just messing around trying to learn AGI32.  It's a t-shaped building, 15ft high ceilings.  I placed 26 2x2 flat panels throughout mounted at 14ft, I made sure they were all toggled "on".  But when I calculate using the full radiosity method, it shows my fc at zero in the whole model.  No light at all.  Is there something I am missing or any reason why model wouldn't display light? 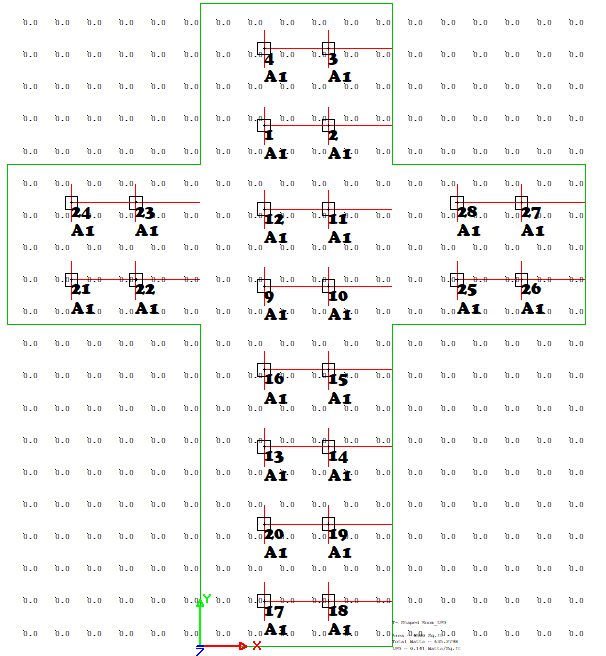 There are quite a few reasons why this could be the case, but one of the most obvious to me with what you've shown is that the calculation grid is not confined to the room, meaning that you probably added either a 2-point or 3-point grid, and not an Automatic Placement grid. We'll get to that in a moment, but whilst it's ok to use any sort of calc grid if you know how to do it, there's a trick with 2-point and 3-point grids that goes back to AGi32's mimicking of common AutoCAD conventions.

If you add a 2-point horizontal grid in AGi32, and you keep many of the common parameters, it will 'aim' the light-meters of the grid perpendicular to the grid, but it needs to know whether to aim them 'up' or 'down'. If you want the light-meters to face 'up' (e.g. light-meter on floor or workplane, aimed up to ceiling), you should choose the bottom-left corner first and the top-right corner second. If you reverse this, the light-meters will all face 'down'. If those light meters are on the 'floor' then you'll get no light registering on the grid light-meters.

A second, but less likely issue - have you chosen a 'Room' for the calculation, and not an 'Object'. That wouldn't cause all the issues you're seeing here, which is why I don't think it's the culprit (or at least it's not the sole culprit), but it's worth checking.

As for 2-point and 3-point grids vs Automatic Placement - in the majority of cases you should add general calc planes in rooms using Automatic Placement. There's something about the way it works that means it works faster in AGi32, apparently. That being said, if you make any physical changes to the room's location or height or shape, AGi32 deletes your calc points and you have to re-specify the grid, so be warned. Apparently the software retains a relationship between the Room and the Grid, so the Grid gets destroyed if you change most parameters. Logic would then dictate that the software should be able to re-create the Grid after the changes to the Room, but apparently the software retains no relationship between the Room and the Grid. This is known as the "That's Ridiculous" paradox.

Thank you for the feedback I really appreciate it!  I'll try these fixes and see what happens.